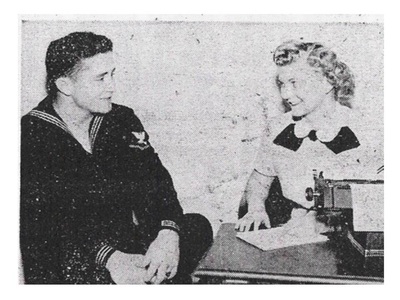 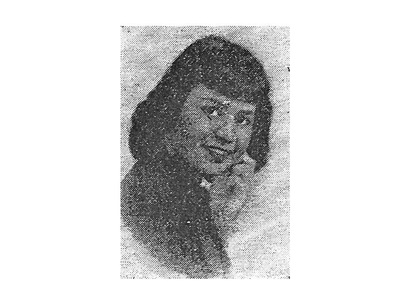 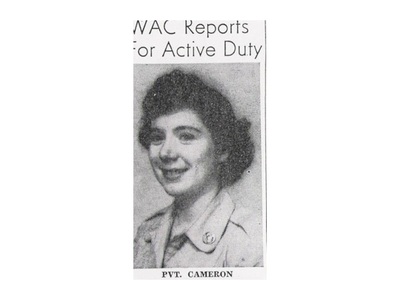 Loretta Cameron of Ecorse was one of a group of women reservists from twenty four states to report to the WAC Center, Fort McClellan, Alabama, for two weeks active duty.

A private in the reserve group, Private Cameron is assigned to the 323rd General Hospital Unit, and is employed at the Michigan Bell Telephone Company. As a reserve, she is one of sixty-two enlisted WAC Reservists from all over the United States, who on August 14th converged on the WAC Center for training.

She is the daughter of Mrs. Elizabeth Cameron, 4304 Beech Street, Ecorse.

Irene Mager Reports for the WAVES

Irene Jean Mager, SA, WAVE, is the daughter of Mr. and Mrs. Nelson Mager of High Street in Ecorse. She is now serving aboard the U.S. Naval Air Station, Alameda, California.

On the staff of the “Carrier,” the station’s newspaper, Miss Mager is a reporter, covering all and any events that may take place on the station.

Miss Mager enlisted in the WAVES on April 24, 1951, and received her recruit training at the Naval Training Center, Great Lakes, Illinois.

Following her completion of the 12 week course in fundamental naval procedure, she was transferred to NAS Alameda on July 11, 1951.

Prior to enlistment in the WAVES, Miss Mager worked for her father at the Mager Roofing Company in Ecorse.

A graduate of the Ecorse High School Class of 1945, Miss Mager was a member of the school band. She also participated in the sports activities at the school.

Miss Mager recently became engaged to Thomas J. Mihm, aviation mechanic third class of Pittsburgh, Pennsylvania. They will be married in the station chapel in April.

Liz Salas From Ecorse if the First WAVE Aboard the Telfair

Liz Salas, Ecorse native and journalist third class USN, a WAVE, stepped off the gangway onto the quarterdeck of the USS Telfair and shot a snappy salute at the officer of the Deck. She asked permission to come aboard and submitted her orders to report for duty. With these actions, she was the first WAVE to serve on a U.S. Navy fleet ship.

When Liz reported to the Navy’s attack transport ship in April 1956, the Telfair had no precedents to fall back upon. Military Sea Transport Service and hospital ships often carry WAVES, but not ships of the combatant fleet.

The Telfair’s crewmen were astonished and fumbled for the right words of greeting for their new shipmate. Captain Charles E. King, commanding officer, declared “The Telfair is honored to have the fleet’s first WAVE aboard; it marks another first for the Telfair,”

The daughter of Mr. and Mrs. Dionisio Sales of Sixth Street in Ecorse, Liz enlisted in the Navy in October 1953 and received her recruit training at Bainbridge, Maryland. After 18 months of duty at Great Lakes, Illinois, she was sent to Pearl Harbor duty in July of 1955.

“Mother was terrified when she heard about me going to sea. She never even let us kids go near water,” Liz said.

Liz discovered that she liked voyaging and schemed for sea duty for some time. After many setbacks she received temporary additional orders from her Commander in Chief, U.S. Pacific Fleet, to travel with the Telfair during a voyage from Pearl Harbor, Hawaii to San Diego, California. Her job was to write feature stories about a group of Navy dependents who were completing a three month tour of duty in Hawaii on the Telfair.

Liz soon discovered that being aboard the Telfair was an adventure. Her first experience was a touch of seasickness. “They told me it would be calm. It was for awhile. Then my stomach started to go up and down and the first day was pretty horrible. I couldn’t understand it and I began to change my mind about going to sea,”

Next came a chivalrous act. While Liz stood on the bow, an ensign jumped in front of her to bear the brunt of the salt spray that suddenly splashed over the bow.

After witnessing fire drills and doing collateral duty as a baby sitter for some of the younger dependents, Liz decided that she liked being at sea. “After I got my sea legs, I enjoyed every minute at sea. I learned something new every day. I’d really like to get permanent duty with the Telfair,” she said.

Liz also wanted to share her pleasant experience with other WAVES. “I think that with a few adjustments, WAVE’s could easily come aboard ships and be just as useful as the men.”