Memories of the Bob-Lo Boat Columbia 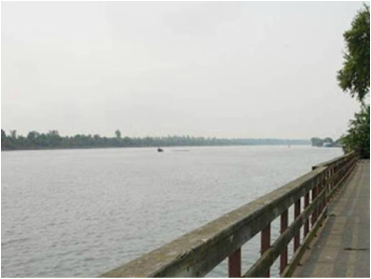 The SS Columbia, the regal queen of Downriver ships, retired in 1991 because of mounting service expenses. Her rousing trumpet will be heard no more. Well named for seaman Christopher Columbus, the SS Columbia had cruised the Detroit River trail of Huron tribe canoes and early French explorers. In 1990 alone, the vessel ferried 31,000 passengers to Bob-Lo Island. We, who for decades, regaled in treading her rollicking decks, mourn.

In the  1930s, my youth days, the epic summer gala was Ecorse Day at Bob-Lo and picnic excursions to remember. It was time when the SS Columbia docked at the foot of Southfield Road, formerly State Street, and West Jefferson.

Those summer days we stood at the dock, thrilled at her lilting charisma, as we watched the Columbia glide in from Detroit. Oh, to hear her trumpted arrival and Finzell's live band tunes ring "Up A Lazy River." I recall boarding her for picnics, rides and games, and dancing all noon and evening to live bands at the immense gleaming outdoor Bob-Lo island dance hall. All that is no more.

Last August (August 1991) not knowing the SS Columbia was retiring, my family and I took her final moonlight cruise, rounding Wyandotte, Detroit and Belle Isle. As I stood at her bow, cherished childhood memories returned.

Arriving at Bob-Lo Island we found a shady tree picnic table alongside the water. After lunch we rollicked at picnic games and races. We clapped for horseshoe ringer champs and cheered at baseball homers. Once in my teens I won a high shoe-kicking contest. My prize was a solid carton of green beans, which I picked up at the Ecorse Grocery.

Dancing to scintillating live bands all afternoon in the grandiose ballroom was sheer delight. In between we rode that favorite pony on that merry-go-round and gleefully screamed, riding the cantankerous "Whip."

Too soon the SS Columbia hailed with her blasts, "Time to leave." Men took off their straw hats to dance with the ladies as we waltzed her deck all the way back to the Ecorse port.

Now a grandmother, it was a thrill that August evening last year to take the SS Columbia moonlight cruise from Bishop Park to Belle Isle and back. With two blocks of passengers my family and I waited at the dock to see the SS Columbia in marquise sunset glitter and like a porcelain dove, drift up to the dock. At her frisky hoot, "glad to see you," we boarded, chatting with old friends from our teens, recalling the excursions. As the ship pointed toward the Ambassador Bridge, I again stood at her rails, glancing at the mewing gulls reeling about her diamond spray.

Cherished memories wafted as we passed her old Ecorse port now obliterated by a tree clustered bird islet where floods of luminous ducks and frolicking geese splashed in the marshes just as the turquoise sunset showed tiny stars. We stared up at the Ambassador Bridge, elated at her spanned chandelier-glittered loops. The SS Columbia rounded Belle Isle and glided back under the beaded Ambassador Bridge toward the Wyandotte port.

My husband and I left the bow to tour the Columbia decks. We danced to the oldie, "What'll I do."  Then below we stood awed at the surging piston arms. I regaled in the bow's brisk breeze as the Columbia followed the channel marked by the red and green buoy lanterns, passing Fighting Island and Ecorse streetlights. Suddenly, the SS Columbia played her powerful beacon on the Wyandotte Bishop Park dock. Her glowing golden boardwalk globes greeted us as the Columbia docked that August night on the money at 11:30 p.m.