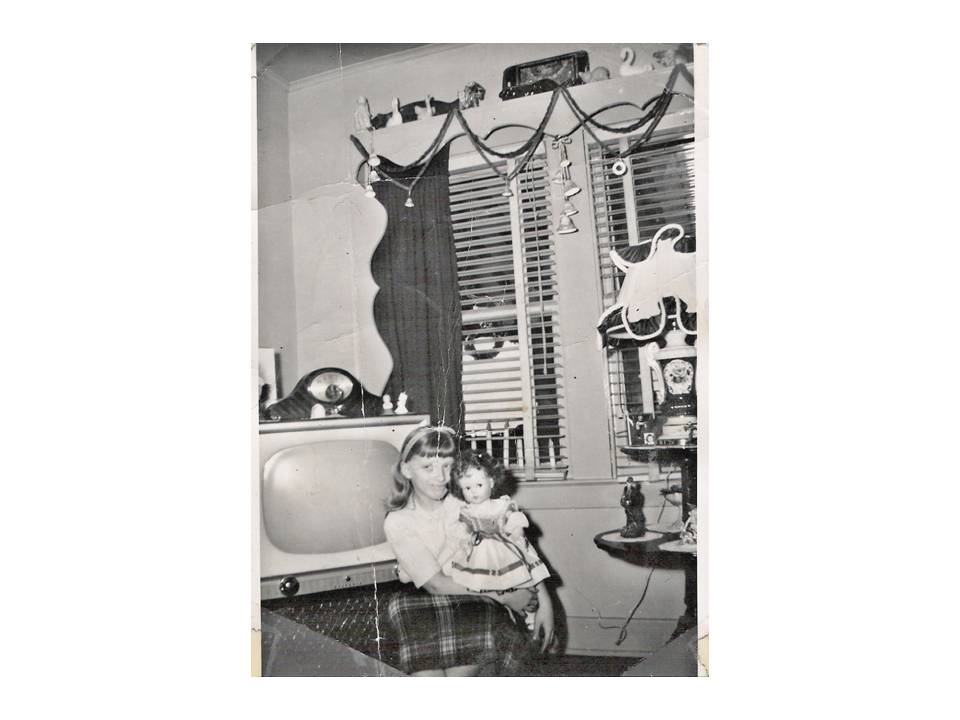 My Grandma Robson lived in an ordinary looking house on Beech Street in Ecorse, Michigan. Her house had brown siding and a backyard with a chicken wire fence around it. She had a fenced in front yard with a gate that always took some extra fingering to open.  She solemnly explained to me that the fence in Mitzi, her black dog, and kept out boy dogs looking for a girl friend. She grew hollyhocks in her back yard and sunflowers and lilacs. Grandma’s house may have looked ordinary from the outside, but on the inside, magic shimmered. Grandma made her surrounding magic, especially at Christmas.

She usually invited her grown daughters and their husbands and families over for Christmas which amounted to a houseful, because the head count also included her younger daughter and of course, my grandfather. After we ate Christmas dinner, the kids sat around under the Christmas tree playing with the toys, especially the toy train and the Tinker toys, while the adults sat and watched television. Mitzi sniffed around everyone’s heels, prospecting for turkey leftovers and maybe boy dogs!

I remember the Christmas that I turned ten, especially, because that’s the Christmas that my parents bought me the walking doll. I don’t know where my mom got the idea that I was a girl. I had tried my best to convince her otherwise. But that Christmas at Grandma Robsons a large package with my name on it rested right at the base of the tree. My two brothers that could talk gleefully informed me that there was a doll in the package!  I couldn’t believe that my mom and dad would do that to me, so I hotly denied that a doll would disgrace Grandma Robson’s Christmas tree.

Grandma Robson wouldn’t let that happen. She even stuck up for me when I tore my new dress swinging down from the branch of the small tree in her backyard.

“Tell those stupid boys there isn’t a doll under the Christmas tree, please!” I begged Grandma Robson.

She put her arm around me. “I can’t tell them that because I don’t know if there is a doll under there or not,” she said. “Why don’t you sit down and open the present and see what it is?”

I opened the package like it had snakes crawling out of it. If I had a choice, I’d rather have a package full of snakes than a doll.  It was a walking doll.  Walking dolls were in fashion then. They had a string on the back that you pulled and they walked a few steps by themselves. If you were a little girl, they were magic. I wasn’t a little girl, so the doll wasn’t magic. She was a responsibility. I had to be thankful for her and I wasn’t.

“Hey sissy, take your doll for a walk!” my oldest brother hooted. He stuck his tongue out at me. “Sissy, sissy, you play with dolls.”

I picked up the walking doll and aimed it at him, ready to bang him over the head with it. The rough handling wrinkled her fancy blue coat, but I didn’t care.

I put the doll back in the box and pulled the paper over it. The boys were in the dining room playing with the electric train, and I barged in , ready to take over as engineer. They boys didn’t want me to be the engineer. We had a satisfying fight and I was guiding the train around the track when Grandma came out and put her arm around me. “You didn’t even bother to get to know your doll,” she said. “You didn’t give her a chance.”

Intrigued, I followed her back to the living room. My despised walking doll was still in the package, but attached to it was another package. “You forgot to open that one,” Grandma Robson said.

This time I tore open the package. Inside was a baseball uniform, a pair of pants and a shirt with the letters Detroit Tigers embroidered across the front. I pulled the doll out of the package and Grandma helped me take off the fancy dress and coat and put the baseball uniform on my walking doll.  My meanie brothers even went out to the backyard with me so I could find a stick to make a baseball bat. We had that walking doll walking around the bases in no time. Even my grandfather cheered her on.

I still have the picture of me sitting proudly under the Christmas tree, holding that walking doll. She isn’t wearing her baseball uniform, because my Mom insisted that both she and I be on our good behavior for the picture. She is wearing a dress and so am I. But Grandma Robson’s magic is still there. When I look at that picture, I see the walking doll wearing the baseball uniform and walking around the bases that I made with pillows. When I look at that picture, I still feel the glow of Grandma Robson’s love.