Music Was a Family Matter for the Campbells 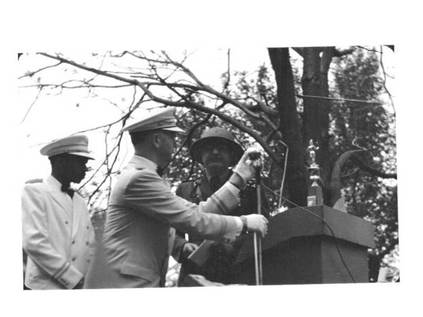 While at Ecorse High School Alexander Campbell studied music under the director of Herbert Saylor and was a member of the Ecorse High School Marching B and for four years.  He was also one of the outstanding students in the class of 1951. At the University of Michigan he studied in the Department of Music with the intention of becoming a band director after graduation. His favorite instrument was the tenor saxophone and he played three numbers in the Ecorse High School Band program. They were:  “Concerto No. 1,” by “Singeless, “Concertina” by Guilhaud and “Tambourin” by Rameau.  Mrs. Doris Green accompanied him at the piano.

Both the Ecorse Senior High Band and the sixty piece Junior High Band appeared in the musical program which featured both standard music and popular numbers.

After playing with his old band, Alexander returned to the University of Michigan and played more solos. In 1954 he and other students competed in the annual Gulantics talent show in Hill Auditorium. His trio, headed by Anceo Franciso on piano with Jimmie Williams on bass took the $25 third place prize.

“I played in the Michigan Band under William Revelli – who was a great man, he made me sweat blood-but I also led a popular jazz sextet,” Alexander later recalled. He graduated from the School of Music with a B.A. in 1955 and a Masters Degree in 1960. He once again returned to Ecorse High School where he directed the band for thirty years until he retired to California with his wife Barbara in 1986.

Alexander Campbell, his wife, and their sons Alexander T. Campbell and Garland and David were also musicians. Alexander T. Campbell played sax in the University of Michigan Band from 1975-1977 and David the youngest played percussion while getting his BA in fine arts in 1980. Garland earned his University of Michigan degree in political science and communications and was an Emmy winning producer of children’s TV programs before becoming a college band director.

Garland said that having a band director for a father meant he and his brothers “always had all sorts of instruments at home – violins, guitars, trombones. We learned something about all of them because they were sitting around the house. My mom was a musician too, but she became an occupational therapist.”

“We didn’t cram anything down their throats, but we exposed them to opportunities I wish I’d had. I used to pack them up, leave home and take them to Ann Arbor to listen to the Michigan Band practice,”  Alexander Sr. said.

The Ecorse High School Band marched in the Mardi Gras Parade in New Orleans on February 29, 1976. The appearance of the 79 member band in the 4 ½ hour parade marked the first time that a unit from Michigan or from the North appeared in the parade which is the final celebration before Lent

The band members and their director Alexander Campbell and Assistant Director Jerry Copeland and thirteen chaperones boarded three buses from Ecorse High School the Friday before the parade. Many Ecorse residents gathered at the School to see them off.

Mrs. Marie Salisbury, an Ecorse resident for 23 years and mother of Larry Salisbury, a school board member at the time, obtained the invitation for the band to participate in the parade. Mrs. Salisbury had attended the Mardi Gras for the past 17 years and had “never seen a Michigan group participate.” A family friend, Arthur Daure, was chairman of the Krewe of Thoth parade and it was from him  that she received the invitation to invite any group she wished. “I could have invited any civic group of older people but I thought it would be better to give those youngsters a chance to make good on the invitation.”

The band members and their families and friends raised $13,000 through various projects, including bake sales, a spaghetti dinner and lunch, a hockey benefit, a card party, paper drive, band concert, student dance, candle sale and medallion sale. Many civic organizations, business leaders and private citizens also assisted. The largest contribution came from the city of Ecorse who gave $2,600 for a bus rental.

Alexander Sr. played sax for Motown records during the company’s heyday for Martha and the Vandellas, the Temptations, the Four Tops and other groups. In the fall of 1996 the Campbells released their first CD from Square 1 produced by their company, Bunk Bed Music and marketed by another family firm, Marquis Records of Wilmington, California. Alexander Sr. was the session director for the recording and three other musicians completed the Campbell Brothers sextet.