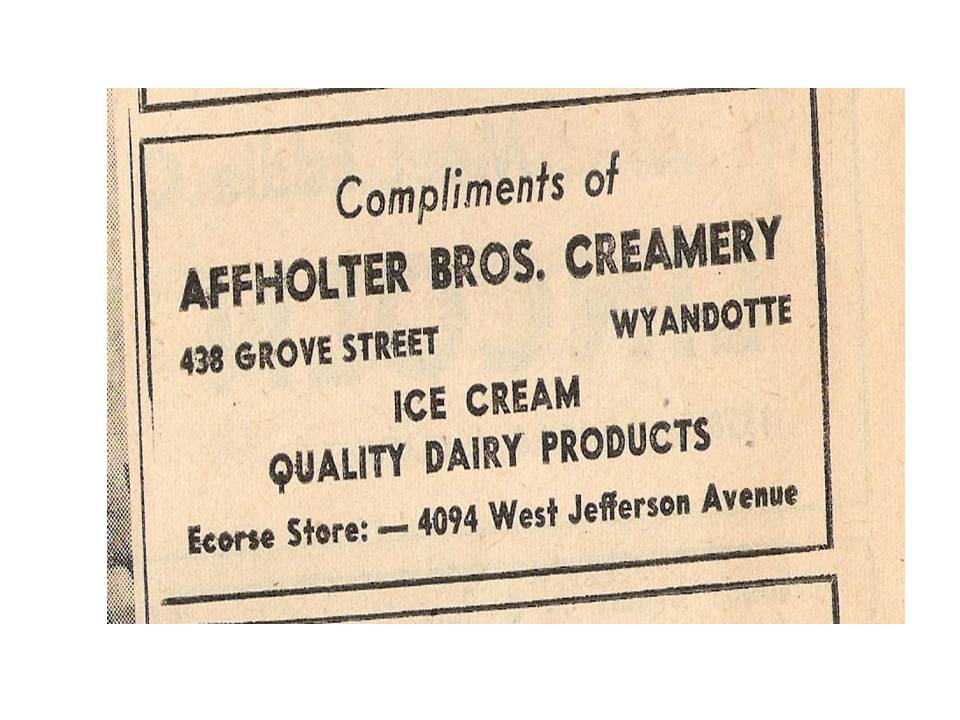 On the south end of Biddle Avenue in Wyandotte, Michigan, there was a dairy called Affholters. In my hometown of Ecorse, they had a retail outlet. It was on West Jefferson between West Broadway and West Josephine. The dime store was on the corner and Affholters was right next door.

My memories of the Ecorse Affholters store come back to me from the late 1940s and early 1950s. At that time I was in my teens and there was always enough left over in my manila pay envelope from the Ecorse Advertiser delivery route or from my Loveland's Drug Store pay envelope to provide a treat at Affholters.

The front of the store, I think, was modern for the times. Dare I say, almost art deco in Ecorse? It was square across the front and done in a glazed tile a little different than other business on Jefferson. It had a banner across the top that lit up at night in neon, proclaiming the name "Affholters."

There was a large plate glass window and when you looked in, because of the abundant fluorescent lights you could see everything and everyone in the store. There was a large glass door in the front and when you opened it, the fragrance of farm fresh dairies came to your nose and let you know ahead of time what waited inside.

To the left and running parallel to the window a large case cooled the products it held. It had a slanted glass front to it and sliding doors in the back to give clerk's access to the products inside. Inside this case there was milk in necked glass bottles that had paper caps that you had to lift off by a tab with your thumb. Now we're talking REAL milk here, not this wimpy 1/2 percent,  1 percent, or 2 percent stuff, but REAL milk with CREAM for three or four inches in the neck!

The cream was carefully poured off at home and saved for tea or coffee or as a treat over oatmeal or over Kellogg's Corn Flakes. Skilled milk, buttermilk, chocolate milk and cream in pint and 1/2 pint glass bottles with those same paper caps all stood solemnly in their places in the case. REAL butter lay wrapped in rice or oiled paper. There also was yogurt, sour cream and cottage cheese.

A big brass cash register next to this case had numbered buttons. The total button when pushed opened the cash drawer and the bell rang. Your money was placed on the marble sill over the cash drawer and your change counted out. The serving counters took up the rest of the store. They were like a series of U's with the tops to the left and facing the left wall of the store. The last U was "reserved" for the girls who worked there. They sat back there when no customers were in the store or when they were finished with the duties that kept the store smelling so fresh.

Summer evenings always attracted a crowd at Affholters. An evening stroll had to include Affholters ice cream. In the early spring and late fall when the demand for ice cream was not go great, people would stop in just for milk or butter. The early spring and late fall were the times for "accepted" guys who sat at the back U under the pretext that it was easier to serve them.

The "customer side" of these U's had stools at regularly spaced intervals. The stools had a single leg going down firmly anchoring it to the tiled floor. The top of the stool was flat and paddle with no back. The stool swung through a full 360 degrees. You could sit on the stool, pull your legs up, grab the counter in front of you, give a mighty tug and spin yourself silly while waiting for your order to be taken. "Course I never knew anyone who did that!"

High on the wall in back of these counters was a large sign that had the price of everything in the store. When the girls went up the ladder to make a price change, the new prices were always a point of great interest to a boy of my age.

Ahhhh! The girls that worked there. Only girls worked at the store. They were generally girls who were high school seniors from Ecorse and the surrounding communities of River Rouge, Lincoln Park or Wyandotte. They were always in a starched uniform, colors matching the motif of the store itself. A mandatory hair net topped off the uniforms and made them all look like Betty Grable as Rosie the Riveter. The wall behind the counters had shelves that held the various serving dishes for sodas, malteds, sundaes and banana splits and the paper cartons for packing ice cream.

Now here again I talk ice cream with REAL butter fat content. I bet if you had asked any one of those girls for "low fat" they would think you were being a smartie trying to speak Chinese to them.

Against the back wall there were sinks to wash dishes, those long curved neck dispensers with the handles sticking straight up from the top (they always looked like swan necks to me.) They dispensed soda water, Vernor's Ginger Ale, Nehi Grape Soda and Coke. Scattered about were coffee makers and clear glass jars with pumps on top that dispensed flavored syrups. There were the stainless steel chest freezes holding the many flavors of ice cream they served. The stainless steel freezers had pockets attached to the side of them that contained water. The ice creams scoops were stored there. From there the scoops made the dive down into the freezer to come up with the good stuff.

Aha! We have finally gotten down to the good stuff! My favorite "good thing" was made with Vernor's Ginger Ale in a tall glass with a dip of vanilla ice cream placed on top. i can't remember, was this a float or a "Boston Cooler?" The girls made tin roof and hot Saunders fudge sundaes. They made all kinds of sodas. They made malteds. Did they make malteds!

They would serve the malted with a long spoon and two straws in half wrapped tissue that stuck straight up in the thick malted. The lower half of the straw tissue wrapped removed by the girls and placed in the glass made a very "sanitary" presentation. The malt was so thick that the straws were useless so it was consumed with the spoon until the bottom was reached. Then the wrapper was removed from the straws and they were used to slurp out all of the goodness at the very bottom of the glass. "Course, I always did that!"

The mouth's saliva being generous from a recently consumed sweet would coat one end of the saved wrapper. Then the wrapper was replaced over the straw, the straw placed in the mouth, and the head tilted back. With a blow gun-like puff of air, the wrapper rocketed up to the high ceiling and with a plop stuck there. There were those who would claim bragging rights as to the number of those wrappers that they had successfully launched and that were up there for all to see. "Course, I never knew anyone who did that!

Then there were the banana splits. The girls made banana splits with pride. They started with a stainless steel oblong vessel that was on a very short pedestal. They placed a lace paper oily at the bottom, then peeled, split and placed a banana on top of the paper.Next, generous scoops of vanilla, chocolate and strawberry ice cream were placed on the banana. At this point you would have some control over the construction of the split.  The next ingredients you would choose from were syrup, fudge, pineapple or one of their berry sauces.

Then came the whipped cream - Affholter's whipped cream in CO2 charged aluminum containers filled right there in the store. It hissed out and  covered all. The next ingredient, crushed nuts, was generously sprinkled on top and a red maraschino cherry topped the whole thing.

I have to stop now as my eyes seem to be getting very blurry and the memories seem to be fading back to wherever they came from.

Am I the only one who does that?