Ecorse Along the Detroit River
​ 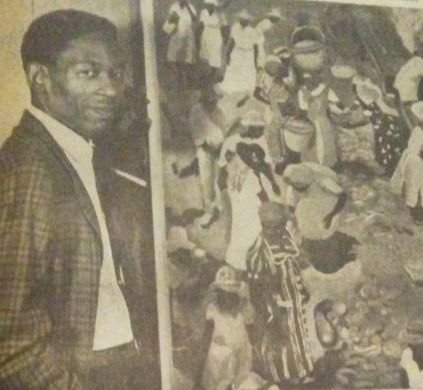 Over in the Ecorse Department of Public Works, there's a quiet man named Velish McMullen, who earns his living as a utility driver. Sometimes he works with the tree-trimming crew, sometimes with the street cleaning detail. Currently, he's driving a garbage truck.
​And if it hadn't been for the persistence of his friends in the City Garage, who had seen his paintings no one would know that this man is also a talented artist and well trained in his profession.

Since his friends insisted, McMullen reluctantly entered some of his paintings in the art exhibit held last month by the Ecorse Jaycees as part of Jay Cee week. To his surprise he walked off with the first prize in oils for a lively painting of a street scene in Haiti.
McMullen, who lives at 3853 Nineteenth, grew up in Jackson, MIssissippi, the son of Mr. and Mrs. James McMullen, who still live there.
"All my life, all I ever wanted to be was an artist," he recalls, "but we were a poor family- and with two brothers and a sister, this kind of education seemed only a wonderful dream."

Then came World War II. McMullen spent three years in Army ordnance, most of it in Europe and the Far East.  "I sketched all the time," he remembers.

After the War came the G.I. Bill and its possibilities for advanced education. But romance stepped in. McMullen went back to Jackson, married "the girl down the street," and enrolled in Jackson State Teacher's College, planning to earn a degree and become a teacher.

Somehow, the old yearning to study art remained, and after a year and half at Jackson State with the encouragement of his family, McMullen "chucked it all," as he says, and enrolled in the Art Institute of Pittsburgh. He studied at the Art Institute for three years and graduated in the upper portion of his class.

After graduation, the McMullens moved to Ecorse where the McMullens had relatives, and Mac "pounded the pavements" looking for work in the commercial art field. But soon the practical need to feed and clothe his growing family took precedence. He found work in a factory, and for the past five years he has bee working for the City of Ecorse.

McMullen still loves art, though, and last year - often by painting far into the night after completing a full days work for the City - this soft spoken artist completed the phenomenal number of fifteen oils.

Now, since the art exhibit and the blue ribbon for his work, Mac is again thinking of doing more with his talent. With wife Dorothy, and children Vincent 15; Joyce, 13; and Emily, 12, as fans and boosters- the Ecorse Jaycee may find they've started a lot more than just an annual contest!