Some Ecorse Education Events of 1958 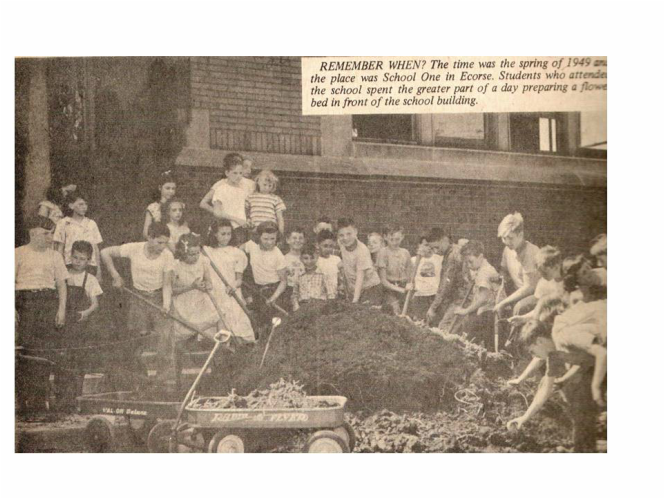 Francis A.  Labadie, 51. died of pneumonia on New Year’s Eve, December 31, 1957 in Outer Drive Hospital. Last rites were held at St. Francis Xavier Church and he was buried in Holy Sepulcher Cemetery.

Twelve Ecorse firemen and policemen formed an honor guard, and the pallbearers were Ecorse school teachers with whom he had been closely associated. They were Glen Hunt, William Weeber, Ralph McNaughton, David Hochrein, Omar Vogt, and Donald Draper.

A member of the faculty of Ecorse High School for 28 years, he had also served on the city council for 18 years. He resigned the post in August to run unsuccessfully for city assessor. At the time of his death he was head of the Ecorse High School mathematics department.

A member of a pioneer Downriver family, Labadie was born July 13, 1906, in Ecorse. His family lived at 61 Labadie, a street named for his ancestors. He compiled the tenth grade at Ecorse high school in 1921, and was graduated from Western High School, Detroit, in 1923. He attended the University of Detroit for two years and transferred to Michigan State Normal College, graduating in 1929.

An outstanding athlete, Labadie played professional baseball for a year before starting his teaching carrier at Ecorse High School. He coached baseball, football, and basketball at the High School. As mentor of the Great Lakes Steel Post 314 American Legion Baseball team, he developed a quintet that never bowed to defeat and eventually won a state championship.

He was appointed as Ecorse’s first mayor pro tempore in 1942, and held his post several times for polling the highest number of voices as a council candidate. He at one time served as a member of the Wayne County Board of Supervisors.

Know and respected as a champion of the people during his many years of public service, Francis Labadie sponsored several resolutions for civic improvements.

A life devoted to his hometown Ecorse and to teaching ended Thursday, February 27, 1958, for 67-year-old Roy W. Seavitt. He died at Outer Drive Hospital after a lengthy illness.

Roy W. Seavitt was born on February 14, 1891, on his maternal grandmother’s farm in Ecorse. His parents were John and Josephine Seavitt.

He attended Ecorse public schools through the tenth grade and completed his twelfth grade education at Detroit McMillan High School. He peddled Detroit newspapers before and after school from the time he was eight until he was 14 years old.

After he graduated from high school, Roy taught two years at Ecorse School One, as one of its first teachers. After two years of teaching, he went into the drug and tobacco business with his brother Louis, for two years. Then Roy decided he wanted to be a teacher. He went to Michigan State Normal College and graduated in 1915.

In February 1916, Roy became an attendance office in Detroit and then he accepted a teaching position at Carey School. Eventually he was transferred to teach at Southwestern high School. He became principal of the Birdhurst School in September 1925.

Seven months later he was appointed as principal of the then new Clinton School. Recognized as an efficient organizer of schools, school authorities chose him to settle racial trouble. He completed surveys for many of the future Detroit public schools in the Palm Woods and University of Detroit sections.

Roy Seavitt was a member of the Ecorse School Board from 1925 to 1949. When he was first elected to the Board of Education candidates were elected by caucus.  Roy advocated voting by ballot and the following year candidates were required to file for office. He also served as a justice of the peace in Ecorse from 1927 to 1935 as well as being a director of the Security Bank from 1934 until his death. He also played football and baseball on local teams.

Funeral services for Roy Seavitt were held from the Gallagher Funeral Home in River Rouge and from St. Francis Xavier Church in Ecorse. He was buried at Holy Sepulchre Cemetery.

The coaches of the contest were  Jerome Arfa, Ecorse, which has taken first place in the district contest for the years of 1953, 1954, 1956, and 1957; Carol Armey, who coached Neil Phillips of Garden City’ and Robert Wick, coach of the Lincoln Park contestants.

Joe Montie will compete in the zone contest to be held Friday March 7 at Western High School.

Everyone by this time is settled down with going to school and now many things are happening. Like for instance, Jerry Nichols and Susan James or Don Miller and his new girl friend.

Another thing of interest is the school dances. The senior class is giving a dance tomorrow from 9 p.m. until midnight. It will be held in the high school cafeteria.

There are many other items of interest going around Ecorse High so watch next week’s paper for news about them.

By Gloria Ture and Nancy Thomas

In our first article, we would like to state the purpose of our student council. Our council gives the students a chance to voice their opinions and to present any new ideas which might better their school.

To become a member of the student council, you must maintain a C-1 average and you must be elected by the members of your home room.