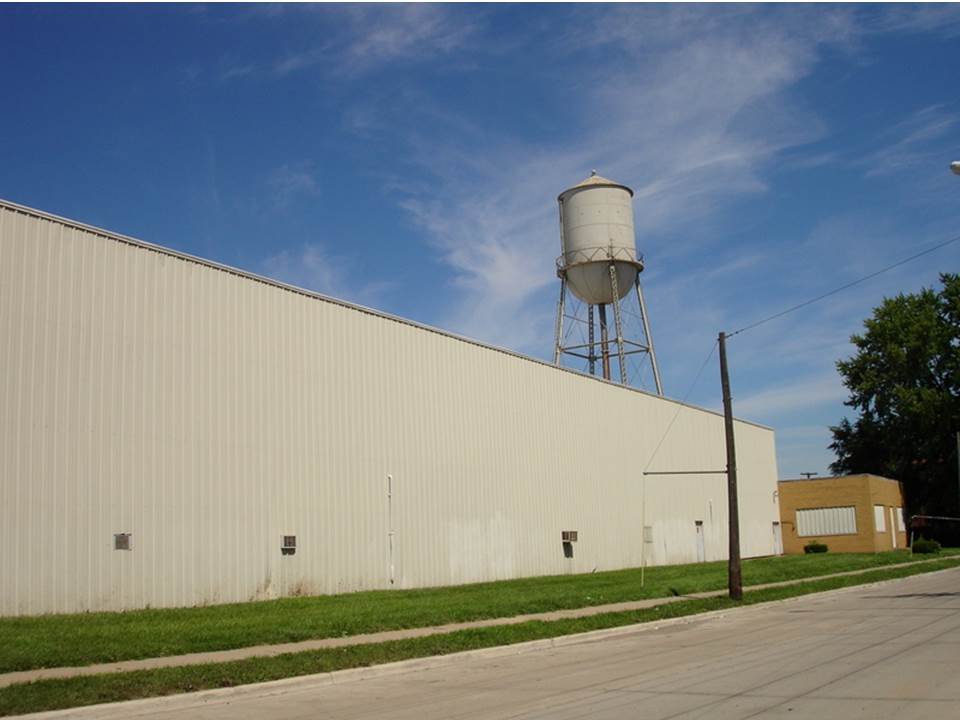 In my childhood estimation and imagination, High Street in Ecorse, Michigan surpassed Broadway in New York City or Route 66 that wound its way across the United States through diverse scenery and had fascinating tales to tell. High Street did the same thing on an Ecorse scale. We lived on Pitt Street, one block from High Street, and High Street and I shared daily bicycle and pedestrian adventures.Ecorse Police/Fire Chief Al Jaeger lived at 4425 High Street, not too far from School One where I walked down High Street to school every day. One December Monday in 1945, Fire Chief Al Jaeger, age 57, pleasingly plum and bespeckled, stood on the glassed in porch of his neat frame house. He buttoned up his overcoat, getting ready to leave for his office in the new municipal building on High Street. He gazed at the old two-story frame building across the street that had once housed the fire and police departments of the Village of Ecorse, remembering his early days as both the Ecorse Police and Fire Chief.

Twenty five years earlier in 1920, Albert M. Jaeger, had become the first salaried fire chief in Ecorse, the job he still held, and with a force of three men took up office in the wooden city hall across from his house. Now at age 57 in 1945, he went to the fire department in the new municipal building on High and Cicotte Streets to receive the hearty congratulations of the 28 member fire department.

Chief Jaeger remembered Ecorse fires. On a November day in Ecorse in 1918, as a volunteer fireman, he pushed a piano away from the second story window of a burning house to get inside. The piano crashed through the burned out rafters and Jaeger rode it to the first floor. Other firemen carried Jaeger to a doctor’s office, overcome with smoke and unconscious from his injuries. When he revived, he immediately returned to the fire and helped his fellow firemen fight it to its end.

About 1922, two years after he was installed as Ecorse’s first fire chief, Village President Fred Bouchard made Jaeger acting chief of police and he held the two offices jointly until 1926. His joint chiefship provided material for local jokesters. One story had it that Jaeger always worked bareheaded in his office until a call came demanding his services as one department head or another. Then he would grab the correct hat, jam it on his head and run out of his office to whatever challenges lay ahead.

Holding the joint office was difficult in the turbulent days of bootlegging and rum running in Ecorse. Several underworld hideouts sprang up along the Detroit riverfront, huddled beside the river below Southfield Road. One of them known as “Robbers Roost,” often sheltered notorious lawbreakers.

One March day in 1924, Jaeger and one of his men, Benjamin Montie, a fire truck driver and auxiliary policeman, who lived on Goodell Street, one block from High Street, went down to Robbers Roost to investigate a case of petty larceny.  Inside Robbers Roost, two bandits who had just raided the Commonwealth Bank in Detroit and escaped with $17,000 were counting their money. Chief Jaeger and Benjamin Montie took the men to police headquarters for questioning and then Chief Jaeger, Benjamin Montie, and two deputy sheriffs returned to Robbers Roost where they found two more of the bandit ring in hiding.

The two men jumped out of a window into the river. They swam back to shore and were captured just as two others drove up in a car. The men were Bernard Malley, Leo Corbett, Elza Meade and Tim Murray. Meade and Corbett were in the car and Corbett drew a gun and killed Ecorse patrolman-fireman Benjamin Montie. Chief of Police Jaeger drew his gun and killed Corbett.

During the scuffle, Meade drove away in the car and a statewide hunt failed to find him. Later he was arrested in Arizona and sentenced to 20-40 years in Marquette prison. As the bank robbers attempted to get away, they threw the $17.000 all over the streets and waterfront. Finders did not return their spoils.

The Ecorse Advertiser on September 4, 1958 printed an obituary that my superficial teenage self didn’t fully absorb at the time. We had moved two miles away from High Street and the only time I noticed it was when I walked down it with my friends on the way to teenage adventures. Albert M. Jaeger and William T. LaJoie traveled High Street on their final journeys.

Ecorse this week mourned the deaths of two of its most prominent and respected citizens, Albert M. Jaeger, the first chief of both the police and fire department, and William T. LaJoie, who had served for 18 years on the police and fire commission, a post he held longer than any other man in Ecorse History. Close friends for many years, they died within 71 hours of each other in neighboring rooms at Outer Drive Hospital. The Ecorse City Council Tuesday night placed resolutions in their honor on the city records. Ecorse police and firemen formed an honor guard at the funerals of both men, which were attended by city officials and ranking police and fire department officials from Ecorse and neighboring communities.

Jaeger, of 4425 High, Ecorse fire chief for 27 years until his retirement in 1947, had been in ill health for several years. A diabetic, he suffered the loss of a leg by amputation four years ago. He suffered a heart attack two weeks ago and was taken to the hospital where he remained until his death.

Jaeger, who held the posts of chief of the village fire department and town marshal, is credited with organizing Ecorse’s fire department in 1921. When the volunteer systems were abolished in the fire and police departments, and both were manned by paid personnel for the first time, Jaeger was appointed to serve as chief of both departments.

During his 27 years as fire chief, he watched the steady growth of the department, glowing with pride when the complicated alarm system was installed and as each piece of modern equipment was added. He saw the erection of the present municipal building which housed the number one station, and the construction of a second station. The original fire station, jail and council chambers were located in the old village hall at High and Labadie.

The year 1924 was a memorable one for Jaeger during his career as police chief. In a wild gunfight at the notorious Robber’s Roost, he shot and killed a gunman who had slain Benjamin Montie, one of his officers. Montie’s son, Milton, is now a lieutenant in the fire department.

Jaeger was a charter member of the Michigan Fire Chiefs Association and was president of the organization in 1928, 1929 and 1930. He was a member of the Ecorse Goodfellows and the Ecorse Kiwanis Club.

Jaeger is survived by two daughters, Mrs. Maria Lambrix and Geneva Jaeger, both of Ecorse, and one sister, Mrs. Martha Snyder, of Ecorse.

Born in Ecorse on September 3, 1917, Milton Montie lived at 21 West Goodell Street, around the corner from our Pitt Street House and a block from High Street. Every day for four of my childhood years I would walk the short block from Pitt to 21 West Goodell and join my neighborhood pals in Milton’s garage.  Our Thunderbolt Club met in his garage every day and arranged our daily adventures and weekly expeditions into adjoining streets. We planned our evening games in the vacant lot there too and made up pass words and secret rituals around the old work bench that we used for a planning table. Our club rituals were more exciting because the fireman who owned the garage, Milton Montie, would occasionally pay us a visit and give us friendly advice about fun and safety.

As we grew up, the Thunderbolt Club met less often and we saw Milton less often. The son of Cora and Benjamin Montie, Milton said that he was born to be a fireman. His father was an Ecorse firefighter in the 1920s when the city’s firemen were also policemen.  “I used to hang around there all of the time,” he recalled.

After Milton’s father, Benjamin, was killed in a shoot-out with bank robbers at Robber’s Roost on the Ecorse waterfront in 1924, his mother raised him with the help of her father, Frances X. Thibeault and her sister, Ida Thibeault, along with the friendly support of Chief Albert Jaeger. “Chief Albert Jaeger killed the bank robber that shot my father,” Milton recalled, reciting details down to the names of the robbers.

Milton Montie had the distinction of being the last person to be employed by the Village of Ecorse. He was appointed to the Fire Department on January 19, 1942 and Ecorse officially became a city on January 27, 1942, when the city charter was adopted

A year after he joined the Ecorse Fire Department, Milton enlisted in the Army on March 18, 1943, where he was one of a 37 man detachment that landed in Italy with the infantry. For nearly two years he served as senior officer of a group that extinguished fires at major seaports and supply depots throughout Italy and North Africa. Milton served in the Army until December 1, 1945, and then returned to his job with the Ecorse Fire Department.

Three Ecorse fires burned in the chief’s memory:  the Union Carbide fire in 1961 involving an oxygen explosion that killed three people; the Linde Air Company fire of 1962 and the Chase Apartments fire of 1972, where six people died. He considered these fires the worst in Ecorse history. “We spent five days looking for bodies after the Chase Apartments fire,” he remembered.

Personally, he said that he had a few close calls. “There was that fire in a plastics factory at 256 Salliotte. “Everything was going fine, and then there was this big explosion. If I’d been 20 feet closer, I’d be dead.” But the Chief was fortunate. His only serious injury was while he was fighting a coal fire and burnt his foot severely.

During his years with the Ecorse Fire Department, Milton was a member of the Arson Squad and a training officer and Civil Defense liaison, taking an active part in Civil Defense work since 1951. He was an outspoken advocate of fire prevention and revived the annual Fire Prevention Week programs in the public schools.

In 1966 Milton received the distinguished service award for civic services from the Ecorse Kiwanis Club. He could usually be called upon to head up functions and civic activities, including serving as team coordinator on the Ecorse Rowing Club. In July 1977, he was chairman of the successful Ecorse Water Festival.

In 1977, Milton decided to retire, since the Ecorse Fire Department required firemen to retire at 60 and his 60th birthday was on September 3, 1977. “I was thinking about retiring July 11, then decided against it. I decided to hand in my resignation today,” he said in the third week of July 1977.

The day of Milton’s retirement, Roosevelt (Rudy) Lackey, an Ecorse Police and Fire Commissioner, reminisced with the chief in his office. Lackey said, “He will be missed by many. I hope we can fill the position with a man in his footsteps.”

Deputy fire Chief Jim Clemons was appointed to be acting fire chief until the position was filled.

Civilian Milton Montie, he planned to take a vacation at his cottage near the Au Sable River in northern Michigan. After that he said, “Well, I’d like to keep working the fire prevention field. I’ve been so active for so long I can’t keep still.”

When Milton Montie died in December 1986, friends and colleagues from the Downriver area attended his funeral. His house at 21 West Goodell still stands, along with the garage where the Thunderbolt Club used to meet. The last time I saw Milton Montie’s house, it was boarded up. In memory, it is not boarded up. In memory it stands sun shining through the windows, doors wide open to welcome the Thunderbolt Club, and to remember two fire chiefs from Ecorse who were connected by High Street, fate and friendship.