We Made Beautiful Music Together in Ecorse 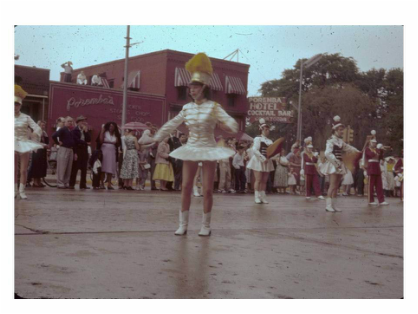 Photograph by John Duguay
The Ecorse Advertiser of May and October of 1950 recorded and predicted the music programs that the 1960s classes were going to enjoy in their future. A story on Thursday, May 11, 1950, talked about the Spring Festival at School Three. The pupils of School Three were presenting their annual Spring Festival in the basement auditorium at 2:30 on May 17, 1950.

The program was planned to include vocal numbers by the choruses, selections by the string choir, Irish specialty numbers, a western act based on popular tunes of the day, and a colorful spring promenade featuring a selected group of girls from the school. All pupils from the second through the sixth grades participated.

The program was directed by Miss Arlyne Burr, grade school supervisor of music in the Ecorse Schools.

A story in the same issue discussed the school music program.  In the 1950s, Charles Sweet directed the music department of the Ecorse Public Schools and he expanded the program so that more children had the opportunity to develop instrumental or vocal talents. Miss Arlyne Burr and Miss Virginia Tyler supervised vocal music in the grade schools. Herbert Saylor directed the bands and supervised the wind instrument instruction in the Ecorse schools.  Grade school pupils sang in choral groups supervised by Miss Tyler and Miss Burr and many of them continued their vocal education in the high school by singing in the Junior High School Choir. Charles Sweet directed the Senior High Choir which had gained fame as one of the best choirs in the southeastern part of Michigan.

During the years 1949-1950, Charles Sweet experimented with small vocal units. A boys’ ensemble and a girls’ ensemble appeared on a number of programs and Mr. Sweet attempted to develop one or more barber shop quartets in the high school.

The Ecorse Advertisernoted that “the emergence of the Ecorse band as a marching unit last fall inspired much favorable comment. Ecorse citizens will be given the opportunity of seeing a much improved and a more colorful edition of the band when it makes its appearance in this year’s Memorial Day parade.”

The story listed the selection of musical instruments that the Board of Education purchased for the band, including two field drums, four trombones, four flutes, twelve clarinets, one bell, lyre, and a sousaphone. A number of string instruments were also purchased as well as 27 new band uniforms, six majorette uniforms, and a drum major and band leader’s uniform.

An October story in The Ecorse Advertiser said that the Ecorse High School marching band had been invited to participate in a “monster parade” in Dearborn. The parade was called The Cavalcade of Dearborn and took the form of a pageant parade with colorful floats and costumed performers providing moving stages for the animated story of the development of the Dearborn area since Indian days. It highlighted a three day celebration in Dearborn in conjunction with the dedication of the new city museum.

The Ecorse High School band was one of ten bands invited to the parade. The band, directed by Herbert Saylor, now had 65 members, six majorettes, and a drum major. It had been a colorful feature of the home football games for the past two years and participated in a number of civic affairs in Ecorse and in neighboring cities.

A fan club of Ecorse High School graduates fondly remembers Miss Helen Garlington and her Glee Club and Songsters.  If you have any special Songster memories to share please email me at kathywarnes@gmail.com