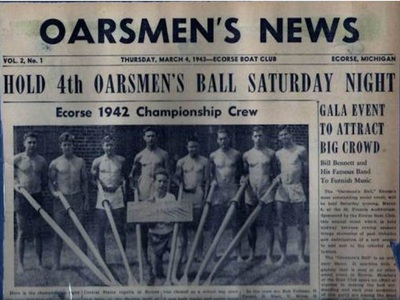 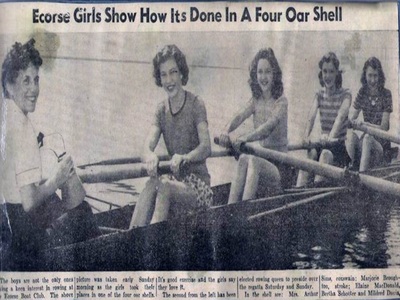 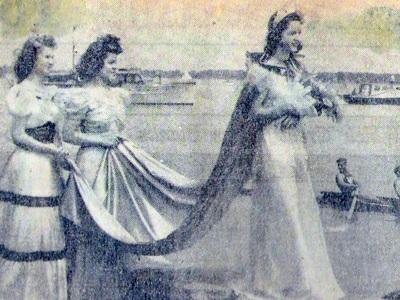 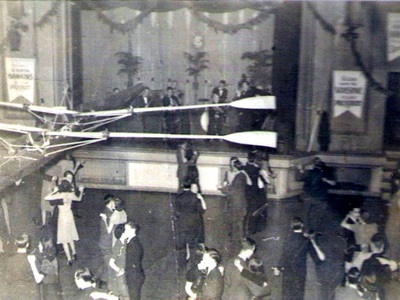 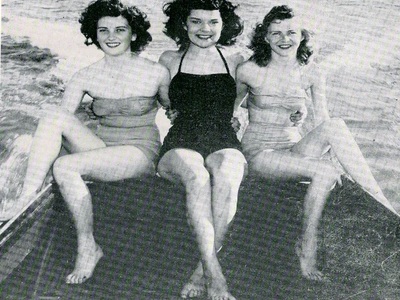 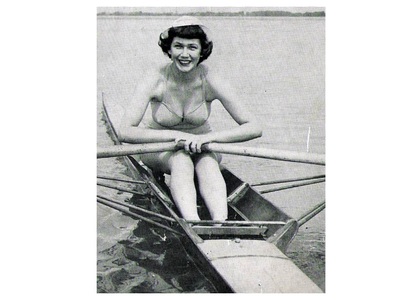 After Jim Rice took over as coach in 1942, the Ecorse Boat Club with Rice at its helm was the crew to beat in any race it entered. The Tank brothers, Louis and Red were still active as scullers and coaches but the younger men were fast replacing the men who started the club in 1938. The club won many races and its trophy room was crowded with medals and trophies, won in Chicago, Philadelphia and all towns where rowing was recognized… The Ecorse High School crew won its third straight race in the third annual Downriver regatta in August 1941. The winning crew consisted of:  George Pappas, stroke; Virgin Ciungan, Harvey Kromrei, Bob White, Reggie LeBlanc, Bob Blair, Earl Newland, Bob Vollmar, bow and front and Bill Hughes, coxswain. The Tank brothers won the 140 pound doubles and placed second in the heavyweight doubles at the Canadian Henley that year and William Tank won second place in the quarter-mile dash for singles and Louis Tank won second place in the heavyweight singles.  The Ecorse High School crew cinched the North American championship at the Henley and the 140-pound eight also won its race.

The Ecorse  “Golden Boy’s” of 1942 showed their stern to the best boats in the U.S. and Canada.   In July 1942, Ecorse oarsmen exceeded hometown expectations when they performed like champions in front of a crowd of 25,000 people lining the Detroit Riverfront in the July 4 and 5th races. Even veteran coach Jim Rice who trained the Ecorse crews and usually accepted praise matter-of-factly, glowed with pride at the performance of his oarsmen.  Ecorse won practically everything in the regatta, successfully defending their numerous titles and adding more championships to the Ecorse Rowing Club’s long list of achievements. Crew members added the Junior Point Trophy, the Senior Point Trophy, and the Senior Eight Championship Trophy to the trophy case at the Ecorse Boat Club as well as various plaques commemorating their Saturday and Sunday victories.

At the end of the Saturday events, Ecorse boasted a score of 61 points, 25 points ahead of the Central Rowing Club of St. Louis, its nearest opponent. On Sunday Ecorse continued to pile up points and records. In the first race Sunday afternoon the Ecorse club entered the High School and the 145 pound crews in the senior eight oar race. The High School crew won the race and the Ecorse 145 pound crew came in third place to give Ecorse a 36 point lead. Manning the High school shell were Bob Vollmar, Harold Covert, R. Blair, V. Mitea, H. Marcotte, C. Crunga, H. Kormrei, R. White and Whitefield as coxswain. An hour later this same High School crew came back to win the Schoolboy Championship.

As two of the three remaining members of the original Wah-Wah-Tah-See Club, Alex Beaubien and Elmer Labadie were two of the most interested spectators at the regatta. Alex Beaubien rowed his last singles race in 1889 when he defeated Knight Wright at the Belle Isle races and he also served as coxswain in the ten oar barge.

From 1940-1942, the Ecorse High School eight lost only one race, rowed at Minneapolis in a borrowed shell set up directly opposite to the one they were familiar with. In 1942 they won both the Junior and Senior Central titles at the Central States Schoolboy regatta in Chicago and both Junior and Senior races at the invitational meet at Culver Military Academy. The 1942 Senior Schoolboy crew also won all major events at the Canadian Henley held at St. Catharines, Ontario, and two eight oar events within an hour to set a new endurance record. There is no record of any crew ever before winning the Henley heavyweight eight and the high school eight events in a single day.

Old timers who saw the 1942 crew in action voted it one of the best crews in the history of rowing. Elmer Labadie and Alex Beauien, members of the first rowing crew that won the championship for Ecorse enjoyed the festivities.

By 1943 most of the “golden boys” of 1942 were serving in the armed forces, but Coach Jim Rice felt optimistic about the 1943 crew’s performance. The 1943 crew won the Central States Interscholastic championship and went on to win the Canadian Henley. They won six races, were second in one race and third in another to capture all of the major events and finish second in point totals. It was the second year in a row that Ecorse boys, under Jim Rice, veteran coach, swept the race in the Henley. The 1943 crew also won the High School Eight Championship and the senior heavyweight as well. John Whitefield was cox, Harold Marcott, stroke, John Gregan, Harvey Kromrei, Corky Poppa, Erwin Kromrei, Paul Scott, John Ghinda and Gus Pappas, bow.

The 1942, 1943 and 1944 crews won all events very regatta they entered, but World War II attrition continued to affect the Ecorse Club. In the spring of 1943 the Ecorse Club regretfully declined the University of Wisconsin invitation to participate in a special spring race including both college and high school crews to be held at the university.

The Ecorse Boat Club participated in only two regattas during the 1944 season, because the World War had halted most of the regattas. In the two regattas that Ecorse oarsmen competed in, the Royal Canadian Henley and the Detroit River, they established records that brought fame and glory to the club and to Ecorse. Ecorse won three first and five seconds in the Henley and the Ecorse High School eight captured the interscholastic championship for the fourth consecutive time. In winning the race, Ecorse defeated the favored Grosse Pointe crew, St. Catharine’s and Buffalo, crossing the finish line nearly two lengths head and defeating the Gross Pointe crew. The Ecorse victory was more remarkable because of its courageous race for the senior eight championship which carried with it the internationally famous Hanlon Memorial Trophy, less than an hour before the high school race. Jud Ross. Coach of the Detroit Club, scratched his crew for the senior race to have his boys in perfect condition. Ecorse became the first club in 59 years to win the Hanlon Trophy two years in succession and speculation had it that the Canadians picked an all star crew this year to prevent the Ecorse boys from winning permanent possession of the Hanlon trophy.

The Ecorse Rowing Club sponsored the Oarsmen’s Ball in conjunction with the rowing regattas and usually held them at St. Francis High School auditorium. The first year that the Ecorse Boat Club held the Oarsmen’s Ball was 1938 and by the 1940s, the Ecorse businessmen’s association had taken on the job of planning and sponsoring Ecorse Days over the July 4th holiday and in conjunction with the rowing regattas, they chose a Rowing Queen and court.  Elaine MacDonald was crowned rowing queen in July 1942 at the Central States Regatta before the first Saturday afternoon race.  Nellie Muntean was 1945 Queen, Donna Schappat won in 1946, twins Clara and Clarice Willis in 1947. and Donna Lewerenz in 1948.

Mike Tank was re-elected to head Ecorse Boat Club for the 1947 season at the annual election of the oarsmen in the main club room at West Jefferson and Mill Street. Tank had been president of the local rowing club for several years and guided the club into one of the best contenders in the country. Edward Kromrei was re-elected vice-president, an office he too held for several years. The club members re-elected Art Sims, Ecorse businessman as secretary and William Jones, affiliated with the Ecorse-Lincoln Park Bank, as treasurer, a first term for him. The club officials considered their most important task to be completing plans for the 9th annual Oarsmen’s Ball, slated for Saturday February 15, 1947 in the St. Francis High School auditorium.

Louis Tank, United States and international sculling champion since 1936, was appointed head coach for Ecorse Boat Club crews for the 1947 season. Club officials searched for a suitable coach to replace Jim Rice who retired from coaching that year and the name of Louis Tank ranked above any other candidates. Tank had been an active oarsman since the Ecorse Boat Club reorganized several years ago and his achievements had been numerous and consistent in both national and international regattas. With this appointment he followed in the footsteps of his father, the late Charles Tank, who was first coach of the present club.

In 1947 the Ecorse crews brought honors to Ecorse by winning the 34th Annual Central States Rowing Regatta held on July 3 and 4 in Ecorse, beating their closest rival, the Detroit Boat Club, by more than 200 points. The only crew to win both a Junior and Senior event was the Ecorse Boat Club’s 145 lbs four with coxswain. In the junior event the winning oarsmen were Wayne Dupuis, Robert Short, Ed Lett and Bill Wilson who pulled away from the Chicago, Wyandotte and St. Louis clubs to win in seven minutes, sixteen seconds, just nosing out Wyandotte by a very small margin. Charles Piros, Ecorse High School sculler, pulled to an easy ten length victory in the high school singles event. The next day he came back in the senior events with a second place finish in the 145 lb singles.

Bob Volmar, Harold Covert, Bob White and George Pappas captured the junior heavy fours without coxswain with a time of six minutes and 51 seconds. However, these boys lost out in the senior event the next day when they were beaten by Detroit in seven minutes and 54 seconds. A strong headwind slowed the time up on the second day.

The Ecorse Advertiser of April 1947 carried a discrete headline announcing that an Olympic contender was to train in Ecorse. The story explained that Mr. Jack Kelly of Philadelphia, Pennsylvania had recently qualified to represent the United States in the 1948 Summer Olympics. He planned to train the spring and summer of 1947 with members of the Ecorse Boat Club, rowing as a singles sculler and he would live in Ecorse while he trained. “We wish him well,” the Advertiser story concluded.

Marvin Graves, a resident of Ecorse at the time, remembers Jack Kelly’s time in Ecorse.  He said that Jack Kelly quickly got to know Ecorse residents and he would join the other oarsmen in their morning and evening workouts. He would also jog at least three times a day for miles up and down Jefferson Avenue, the main street in Ecorse. As he jogged by residents would speak and wave to him and he always waved back. Some people passing in their cars would honk a greeting at him and he would smile and wave back.

When he was 14 years old Graves worked at Loveland’s Drugstore and Jack Kelly would stop in the Drug Store a few times a day for refreshment at the soda fountain.  He remembers Jack Kelly as a pleasant and courteous person. Marvin had to sweep the floor as one of his daily duties and when Marvin swept near Jack Kelly, he would always smile and move his feet or move to another place at the counter without any hard feelings. Everyone working at Lovelands soon began calling him Jack. One summer day Jack came into Lovelands with a very beautiful girl.  He introduced her to the people working there as his sister Pat, who had come for a visit all the way from Philly. It wasn’t until some time later that Marvin realized that her middle name was Patricia and her first name was Grace. Grace Kelly was his sister! In 1947 she was not yet a celebrity. Her stage debut was in 1949 and her first picture, “Fourteen Hours,” was released in 1951. “High Noon,” her second picture was released in 1952, the year Marvin graduated from Ecorse High School.

Graves concluded, “There at the soda fountain in Loveland’s Drug Store, Ecorse, Michigan, U.S.A., broom in hand, I stood face to face with Grace Kelly and didn’t know it!”