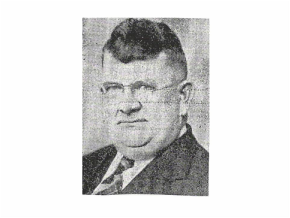 Fire Chief Al Jaeger, age 57, pleasingly plum and bespeckled, stood on the glassed in porch of his neat frame house at 4425 High Street in Ecorse on a December Monday in 1945. He buttoned up his overcoat, getting ready to leave for his office in the new municipal building on High Street. He gazed at the old two-story frame building across the street that had once house the fire and police departments of the Village of Ecorse.

Twenty five years earlier in 1920, Albert M. Jager, had become the first salaried fire chief in Ecorse, the job he still held, and with a force of three men took up office in the wooden city hall across from his house. Now at age 57 in 1945, he went to the fire department in the new municipal building on High and Cicotte Streets to receive the hearty congratulations of the 28 member fire department.

Chief Jaeger remembered Ecorse fires. On a November day in Ecorse in 1918, as a volunteer fireman, he pushed a piano away from the second story window of a burning house to get inside. The piano crashed through the burned out rafters and Jaeger rode it to the first floor. Other firemen carried Jaeger to a doctor's office, overcome with smoke and unconscious from his injuries. When he revived, he immediately returned to the fire and helped his fellow firemen fight it to its end.

About 1922, two years after he was installed as Ecorse's first fire chief, Village President Fred Bouchard made Jaeger acting chief of police. he held the two offices jointly until 1926. His joint chiefship provided material for local jokesters. One story had it that Jaeger always worked bareheaded in his office until a call came demanding his services as one department head or another. Then he would grab the correct hat, jam it on his head and run out of his office to whatever challenges lay ahead.

Holding the joint office was difficult in the turbulent days of bootlegging and rum running in Ecorse. Several underworld hideouts sprang up along the Detroit riverfront, huddled beside the river below Southfield Road. One of them known as "Robbers Roost," often sheltered notorious lawbreakers. One March day in 1924, Jaeger and one of his men, Benjamin Montie, a fire truck driver and auxiliary policeman, went down to Robbers Roost to investigate a case of petty larceny.  Inside Robbers Roost, two bandits who had just raided the Commonwealth Bank in Detroit and escaped with $17,000 were counting their money. Chief Jaeger and Benjamin Montie took the men to police headquarters for questioning and then Chief Jaeger, Benjamin Montie, and two deputy sheriffs returned to Robbers Roost where they found two more of the bandit ring in hiding.

The two men jumped out of a window into the river. They swam back to shore and were captured just as two others drove up in a car. The men were Bernard Malley, Leo Corbett, Elza Meade and Tim Murray. Meade and Corbett were in the car and Corbett drew a gun and killed Ecorse patrolman-fireman Benjamin Montie. Chief of Police Jaeger drew his gun and killed Corbett.

During the scuffle, Meade drove away in the car and a statewide hunt failed to find him. Later he was arrested in Arizona and sentenced to 20-40 years in Marquette prison. As the bank robbers attempted to get away, they threw the $17.000 all over the streets and waterfront. Finders did not return their spoils.