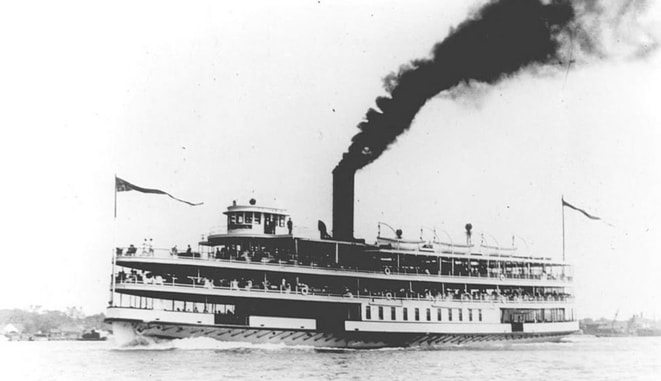 Wikimedia Commons
A Bob-Lo Boat Tragedy
This is a heart strings tragedy that happened a long time ago, but still is resonating in the 21st Century. Jim Rungee of Tennessee is researching his family history and he is seeking any information about Evelyn Smith and any details about the tragedy. With his permission, I am posting his letter and contact information. If you have any information, please contact him.
This is what happened:
Escanaba Daily Press
June 13, 1947, page 1

Steamer Swell Drowns
Three In Detroit River
​
Detroit, June 12, (AP) Coast Guardsmen dragged the swift currents of the Detroit River here today for the bodies of three young people whose 14-boat overturned yesterday in the swell thrown out by an excursion steamer.
A fourth member of the party, Sheila Dupuis, 18, swam to nearby Mamajuda Island, from which she was rescued by a lifeboat which was from the steamer the Columbia. Her companions were Evelyn Smith, 17, John Shesko, 22, and Norman Hoffer, 21.  All were from Ecorse, Michigan.
Miss Dupuis told the story of the tragic outing. The quartet were tasting “the roller coaster thrill of the steamer’s waves,” she said, thinking they were far enough away for safety.  One swell proved their downfall, capsizing the tiny craft before the gaze of some 400 excursionists aboard the Columbia, bound for Bob-Lo Island, a resort near the river’s junction with Lake Erie.
The four clung to the outboard motor-powered boat, but it sunk before rescue craft from the steamer could arrive.
Shesko succumbed quickly thereafter, and Miss Smith was able to swim about only half the distance to the island, Miss Dupuis said. Hoffer swam all but about twenty feet before slipping beneath the surface of the water.
Lifeboats from the Columbia returned Miss Dupuis to the steamer where she was treated for shock and exposure.

This is Jim’s letter:

Hello.
I am Jim Rungee of Murfreesboro, TN. I have been working on a family history. In 1947, my would-have-been first cousin (I wasn't born until 1957), Evelyn Theresa Smith, drowned tragically with 2 others in the Detroit River, just days before her 18th birthday and her High School graduation. I have miraculously located someone that knew her, and he wrote me this small memory:

Evelyn was a Senior in High School when I was a Freshman so we did not have any classes together. She was very pretty and popular and had a great personality. I know this because when I was a Freshman I went to a 10 cent (after school) sock hop in the gym. You left your shoes at the door and danced in your socks to music spun by a local disc jockey. I was, along with some of my frosh buddies, checking out thechicks. We were talking about how good looking Evelyn was when one of the guys dared me to go ask her to dance. Another said that he would give me nickel if I could get her to dance with me. I shuffled over to where she was talking to some of her friends and said "Will you dance the next one with me?" I fully expected her to say "Beat it kid", but to my surprise and, terror, she said "Sure". Her friends were getting a big kick out of it and asking who her new boyfriend was. But she didn't mind and she didn't make fun of my lack of dancing skill. Everyone was devastated by her death. When, at the Baccalaureate service, the Choir sang "Deep River" there wasn't a dry eye in the building.

I have located articles about the drowning, but his mention of the graduation ceremony got me thinking about looking for that, which is how I came across your page. There is a memory on your site from Jean Sexton Wery , who was in Evelyn's High School class of 1947. She has a page posted on your website. Unfortunately, there isn't any contact information. I would love to be able to email her to see if she has memory of Evelyn. Evelyn was an only child, and her parents, Jared and Ena Smith, have long since passed away.
Any help would be greatly appreciated!